Google Webmaster Tools
" Our  Lady of the Shards" is an evolving  series of ceramic ICONS that began  when I found myself staring at a pile of  shards of broken pots.   I thought of  how archeologists might feel, sorting through the buried fragments  of lives and civilizations  long lost.  Piecing shards together  to find  the hands that made those artifacts, the faces of the forgotten  rising from the buried past?  And particularly the faces and the hands  of the women, the forgotten Midwives who brought our ancestors into the world, the Wise Women and the Weavers and Spinners, the Spirits of Place and Goddesses cast aside in the advance of  patriarchal monotheism.   The Memory Keepers,   rising from the  broken soil of desert arroyos,  or revealed by a sudden flood.  Whether buried intentionally or not, these faces and their stories  rise from the dreaming Earth,  their eyes opening as they wake again. 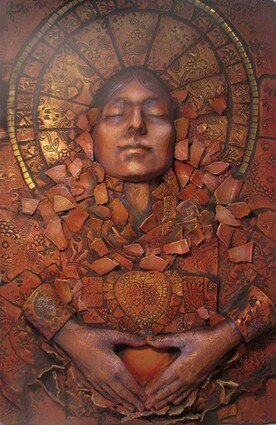 OUR LADY OF THE MIDWIVES

"I hate the scribblers, who only write of War
and leave the glory of the past unsung between the lines."