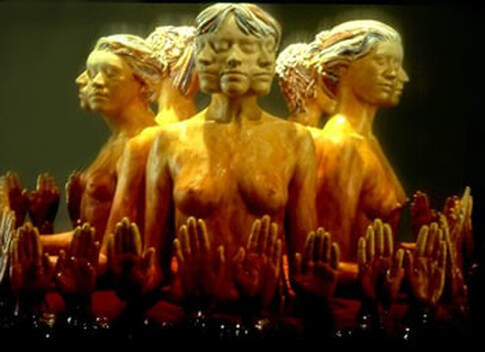 ​SEEING IN A SACRED MANNER
Conversations with Transformative Artists, 1987 to 1992
By Lauren Raine, M.F.A.

"Everything was made for the greater meaning and use of the the tribe. A spoon was more than a spoon, and a sacred pot was also used to store grain in - because they understood that there had to be a weaving between the material world and the other worlds in order to live right and well. An artist was one of those who did the weaving."
......  Sarah Mertz

It was my privilege, in the late 1980's, to share conversations about art, spirituality, and cultural transformation with some extraordinary artists.
Travelling across the country to meet some of them in New York City, in Arkansas, or in California, not long after graduate  school, I realize now I was really trying to understand my own reasons for making art. "Your work is about your life" painter Kathleen Holder told me, "and if you are fortunate enough to do great work, it not only is about your life but it transcends your life and touches many others. "

Although I was never able to publish the collection of interviews these artists so graciously granted me, several were published in a few small periodicals. I take the opportunity to share these voices again, in 2005, because I believe what they have to say is more important than ever.
As a student of art history, I find it ironic that spirituality was a significant impulse in the early development of Modernism. Theosophy, the Golden Dawn, Anthrosophy, as well as Einstein's new physics, enormously inspired the work of such innovators as Mondrian, Kupka, Kandinsky, Arthur Dove, and many others. But by the 1950's, spirituality, indeed, the idea of context, had become a kind of heresy among the institutions that defined what "high" art was. I'm not sure that has changed very much today.

In the 1970's, Tom Wolfe argued in The Painted Word that art was becoming literature, more a media creation of art critics than the artists themselves, who were (and still are) floundering about at the edges of society seeking any kind of identity, even one invented for them. Social context, works created for political, therapeutic, or functional means - or as spiritual revelation - were suspect. The quest was for "pure" aesthetics, celebrated by influential critics like Harold Rosenberg, who wrote, in 1952,

"The turning point of Abstract Expressionism occured when its artists abandoned trying to paint Art (Cubism, Post-Impressionism),
and decided to paint -  just PAINT. The gesture on the canvas was a gesture of liberation from Value - political, aesthetic, moral."

But to liberate art from aesthetic or moral value is, from my perspective, to render it meaningless. It becomes a dissociative intellectual exercise, a lonely endeavor isolated from any larger social or cosmic context, isolated, often, from even personal significance. Performance artist Rafael Montanez Ortiz believes our aesthetics reflect a greater issue. "We can objectify" he said, "at the drop of a hat. We have no problem making an object of anyone or anything. If the logic of a culture permits you to abstract to that extent, it then permits you to live without conscience."

If we're to affirm an art with conscience, it must be, by definition, an art that provides an experience of context, of relationships of every kind. Social, ecological, spiritual, external and internal, visible and invisible. That's what transformative art is to me - artists who are reclaiming the roles of visionary, healer, community activist, and prophet within a grand context, an experience of communion that penetrates our lives on many dimensions of being. In traditional cultures, a shaman is one who "retrieves souls." That can also mean the collective retrieval of "soul", the redemption of imagination, beauty, and most importantly, a sustaining vision of the mystery and sanctity of life.

I thank, again, these artists for their important work, which continues to bless so many lives, and for the truly inspiring conversations they so kindly shared with me.